Melissa Connelly is the founder and head teacher of Melissa’s Playschool. She has been working with children in one capacity or another for over thirty years: as a pediatric nurse, public school teacher and psychiatric child therapist. She has a BS degree in nursing, a MS degree in education and keeps her R.N. license current. She also holds an MFA in creative writing.

Nicole Williams is excited to work at Melissa’s play school this year! Nicole was a primary school teacher in Connecticut for many years before moving to Brooklyn twelve years ago. She enjoys cultivating children’s curiosity and engaging young minds. She earned her BA in English and loves to introduce children to creative literature. She is passionate about supporting child development through engaging play and supporting individuality and creativity. Nicole enjoys dancing with her two young sons, traveling the globe and rooting for the New York Yankees in her free time.

Siobhan Miller is a Midwest native who now works full time in childcare. She began her career looking after cousins and neighbors in Kansas City, Missouri. After graduating from Ohio University with a BA in Publication Design, Siobhan taught English at an elementary school in Spain. Since settling in New York, she continues her passion for working with kids in an energetic and creative way at Melissa’s Playschool. 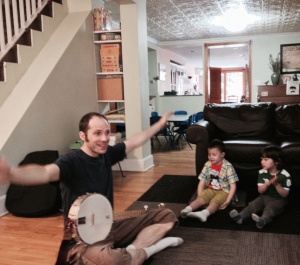 Dan Vonnegut began playing drums and guitar at nine years old. He has a B.A. in music. For 15 years he has been a professional drummer and multi-instrument teacher. He is trained in Music Together and has taught groups of children in various settings. His two children are graduates of Melissa’s Playschool and love music!

Amanda Sidran started practicing yoga in 2001, but became serious about her practice after she had her daughter in 2011. Under the tutelage of her first truly inspirational teacher, Vivekan of Bodhisattva Yoga, she received her 200 hour teaching certification. Shortly thereafter, on a friend’s advice, she completed her children’s yoga certification with Shari Vilchez-Blatt at Karma Kids Yoga and found the opportunity to share this practice with young minds to be incredibly rewarding, not to mention fun. She loves to bring yoga and mindfulness into the classroom at schools, and her studio classes are always playful and fun. Amanda is continuously studying and deepening her own practice, on her mat, and on the meditation cushion. She has also received certification in Every Kids Yoga with Craig Hanauer and Prenatal Yoga with Samba Yoga. amandasidranyoga.com